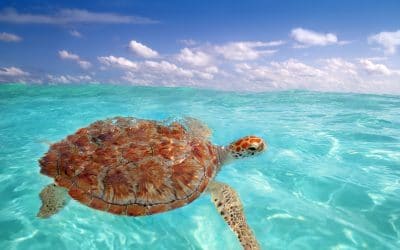 One of the most special natural events to witness in Los Cabos is sea turtle nesting season. The turtles return to the same beaches, which they were born and year after year to lay their eggs. The species of sea turtles that nest in Baja California are protected and endangered. A combination of difficult odds, man-made obstacles like trash and vehicle damage, and egg poaching, has placed several sea turtle species on these lists. The Pacific coast happens to be one of the best places for sea turtles, as the beaches are less populated and there is less boat traffic. In fact, at Rancho San Lucas, turtle tracks and nests can be seen all along the beach where turtles have crawled ashore to lay their eggs. As all of the species are endangered, the nests are often marked with sticks so researches can help protect the nest and make sure the species can continue.

There are 5 species of sea turtles that are found in Los Cabos, all of which are endangered. The Hawksbill, Loggerhead, Leatherback, Olive Ridley and the Green Sea Turtles all nest in Southern Baja.

For visitors and residents, there are really two events that occur during the September – December season to witness. First is being in the right spot at the right time, to witness a turtle landing on the beach to pick its nesting ground. Once it lays the eggs, the sea turtle will return to the sea and continue on with its normal life. The second part and one of the most popular to participate in and witness is the hatching. In order to be strong enough to survive in the wild, the baby turtles have to reach the shoreline by themselves. But the odds are not in their favor. Birds are waiting to snatch them up, and fish are waiting for them once they actually get to the ocean. But many of the challenges they face before reaching the water, which make the odds almost unbeatable, are manmade. Garbage on beaches, tracks from ATV’s or cars in the sand all create obstacles a newborn turtle cannot navigate to make it to the water. A planned hatching helps get people involved to witness this amazing event and helps even up the odds, but helping protect the turtle nests that were marked, and helping the turtles with a clear path to the water. For families and visitors to Los Cabos, this is a truly special event, when one can hold a baby turtle and help it start its journey.

To get involved, check with the concierge at any Grand Solmar Vacation Club property, and find out the dates. Also, take a beach walk at sunset, its great exercise it is romantic and who knows, you may even see a giant sea turtle crawling up the beach to lay her eggs!